When there is nothing to be done during your lunch time, I have a recommendation.  Fill your eat hole with poutine.  The kind of dish your taste buds will thank you for, but perhaps the incoming future heart issues might make you regret.

So far the best poutine I’ve had in Paris has been in The Moose (side note the chicken wings are divine) and not exactly expensive either (by Paris 6ème standards).  But it’s hard to write words about stuffing great food down my face, so just look at dem pix fam.

END_OF_DOCUMENT_TOKEN_TO_BE_REPLACED

Finally an update out of my new Montparnasse HQ, after all that has gone on in the past year this it’s strange to think that two years ago from yesterday I started the move to Paris.

Having officially lived here for a year and six months (a year and seven months if you include when I was staying here for the month of may 2013), it’s been a bizarre experience.  My french has improved and declined and improved again, I’ve lived on each end of the city and some, had the pleasure of battling the french paperwork system, encounters with the ever so helpful Police Nationale, the billion and one things needed to rent an appartement and the hilarity of the french medical system (hope you don’t need to stay monsieur, it will cost 1.300€ a night! and my personal favourite so why are you here? the doctor asked as blood flowed down my face).  But you know what?  I would not have it any other way.

There have certainly been highs and lows, but all I need to do is step out of my front door to realise what I have here.

Having had the opportunity to grow up in one country, live in another and finally settle down here in France I can’t really say my life hasn’t been interesting; once it comes time to end my life long adventure on this great spinning ball in the deep void of space (because both impôts and death are a certainty, unless you have a good accountant then it’s only the latter).

On this time of reflection (my birthday) I take the moment to sit back and accept the previous year and the achievement of some how making it out alive from my early to teenage years with only moderate neurosis.  And let’s be honest, no self identified adult is entirely sure how they made it past eighteen.

It’s also bizarre to think that I’ve had my ongoing project for nineteen years, which is the same amount of time I lived on the otherside of this planet in Canada.  With the second being learning life the hard way in the UK for twelve years after that.

Being thirty-two (and seemingly being seen as twenty-five by my french counterparts – how I love you so France) is an awkward experience, social norms tell me I should have some kind of luxurious appartement, have a few small humans running around and be married to my boyfriend/husband (come on, I can’t fulfill all your wants society) of 17 who I met in high school.  Has that all happened, no not really, do I care?  Not all all, because I’M IN PARIS SUCKAS AND IT’S MAH BERFDAY YO.

The moral of this story, I end up writing a jumbled mess of thoughts on to a journal that has been active for fifteen years and post images of hot dudes for no relevant reason.  Take that internets!

END_OF_DOCUMENT_TOKEN_TO_BE_REPLACED

So I’ve acquired a Toronto VOIP number that is presently being spoofed by Telemarketers.  I’m getting varying levels of threatening phone calls.  Here are but a few.  Telephone numbers included to expose the stupid.

I’m a rather angry lady!
I’ll get you!

Originally published at Кевин.com.ua. You can comment here or there. 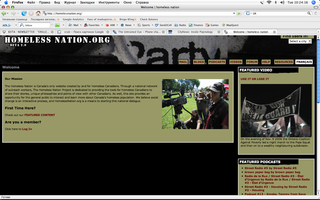 Picture 4
HomelessNation.org – have a look.

Passport woes for all:

It appears almost everybody in Canada is losing their citizenship.